My wife and I added a flagpole to our yard.  I ordered the flagpole from Herold Flag in Rochester.  When it was delivered and I saw how big it was, I was not sure how I could raise the pole without a crane.  I made about 350 pounds of concrete to surround the receiving sleeve and prepared the site to receive the base of the pole.  The most difficult part was to arrange a time to assemble my neighborhood to help.  See the video to watch how my neighbors raised the flag pole in about 75 seconds: 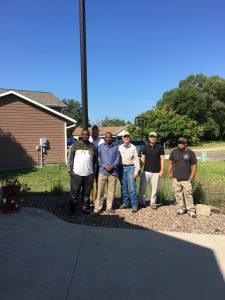 The first flag that we flew (see video) from the new flagpole was presented to my wife when her father, Darold Powell, died.  Darold served in the United States Marine Corp in WWII.  He was awarded a Bronze Star with Valor in the Battle of Peleliu in the South Pacific.  This is his commendation:  “For heroic achievement while serving with Company A, First Battalion, Seventh Marines, First Marine Division, in action against enemy Japanese forces on Peleliu, Palau Islands, on 16 September 1944.  Observing a wounded Marine pinned down by fire from a nearby hostile pillbox, Sergeant Powell immediately threw a smoke grenade close to the aperture of the emplacement and, crawling to the casualty, succeeded in dragging him to a place of safety.  His cool actions and initiative in voluntarily risking his life to save another reflect great credit on Sergeant Powell and the United States Naval Service.”  Sergeant Powell is authorized to wear the Combat “V.”  Signed by Francis P. Matthews, Secretary of the Navy.

The Battle of Peleliu, codenamed Operation Stalemate II by the United States military, was fought between the U.S. and Japan during the Mariana and Palau Campaign of World War II, from September to November 1944, on the island of Peleliu. 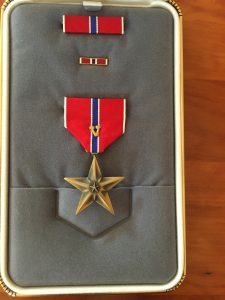 This site uses Akismet to reduce spam. Learn how your comment data is processed.

This site is not the official website of Olmsted County in Minnesota.

Olmsted County’s website can be visited at this link.